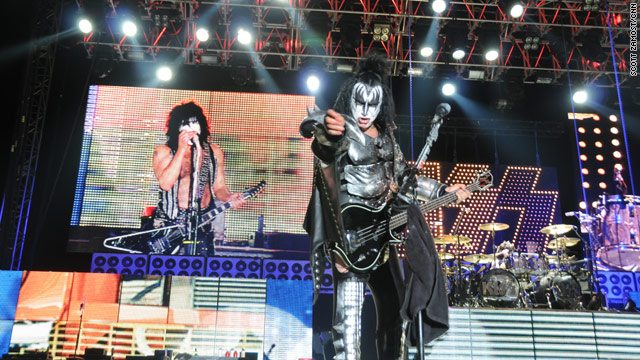 After more than two decades together, KISS bassist Gene Simmons has married his longtime girlfriend, according to his publicist.

Simmons, who is also the star of the reality show "Gene Simmons Family Jewels," has dated Shannon Tweed for 28 years.

The pair got hitched in Beverly Hills, said the publicist, Dawn Miller.

During his proposal in Belize, featured in an earlier episode, Simmons tells his love what she means to him.

"I come with so much baggage, but you're the only friend I've got, you're the only one I've ever loved," he said. "I've never said those words to anybody. It's funny, I used to watch movies where they say I can't live without you, but for me it's true."

The proposal came after a tiff between the two on "The Joy Behar Show" this summer.

Simmons joined in a joke about his philandering ways, ticking Tweed off. She stormed off the set.

"Will Gene and Shannon work past their problems and make it down the aisle?" the reality show's website touts in a spotlight on wedding episodes set to start Tuesday.

CNN Presents “Kiss Inc.,” an exclusive behind-the-scenes look at the band and the brand on Sunday, Oct. 23 at 8 pm and 11 pm ET.