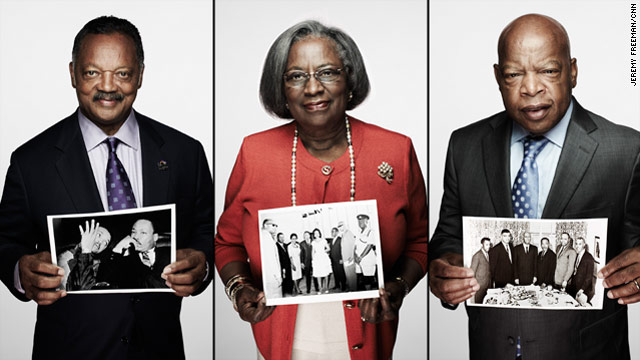 "Nearly 50 years after the March on Washington, our work - Dr. King's work - is not yet complete," President Barack Obama said at the dedication ceremony.

The monument to the slain civil rights leader was due to have been dedicated on August 28, the anniversary of the 1963 March on Washington when King delivered his world-altering "I Have a Dream" speech, but Hurricane Irene forced the event to be postponed.

The memorial site, which features a striking 30-foot statue of King gazing out on the iconic Tidal Basin, lies between the Lincoln Memorial and the Thomas Jefferson Memorial on the National Mall. The statue, representing a "Stone of Hope," sits forward from a "Mountain of Despair."

Visitors pass through the mountain on their way to King's statue and an expanse along the basin rimmed with an inscription wall covered with stone carvings of some of his most famous quotes. The four-acre area will also feature the iconic cherry blossom trees that draw thousands of tourists to the Mall each spring.

Photographs touched the nation’s conscience during the struggle for civil rights. On the eve of the dedication to the Martin Luther King Jr. National Memorial, Jesse Jackson, Juanita Abernathy, Joseph Lowery and others share memories and photos of the civil rights pioneer, a man they knew as a friend.

“Memories of an icon”  highlights six close friends of Dr. King as they use photographs to share their fondest memories of the late icon.