The family of the first victim to die in the 2001 anthrax attacks will get $2.5 million from the U.S. government under a settlement reached last week, according to court documents.

Bob Stevens, 63, worked as a photo editor for American Media Inc. and was the first of five deaths from the attacks. He died October 5, 2001, after inhaling anthrax that investigators believe was in a letter sent to American Media, the publisher of the Sun and National Enquirer tabloids, at its offices in Boca Raton, Florida.

The FBI eventually blamed the attacks on a civilian scientist at the Army's biological research laboratory at Fort Detrick, Maryland. The suspect, microbiologist Bruce Ivins, had a history of mental illness and killed himself in 2008 before investigators brought charges against him, federal prosecutors said.

Stevens' family sued the government for $50 million in 2003, arguing that the military laboratory in Maryland that was identified as the source of the bacterium should have had tighter security.

A settlement notice dated November 23 was filed in U.S. District Court for the Southern District of Florida.

A separate stipulation of settlement document filed with the court said the government admitted no blame in the case. It also said attorneys fees owed by the Stevens family would come out of the settlement money, at no more than 25% of the total.

On October 31, the lawyer for Stevens' family said a settlement had been reached but that final details had to be worked out with the Justice Department.

"I think the family was vindicated that the government has agreed to settle the case with them in spite of the fact that they put up a lot of roadblocks," the lawyer, Richard Schuler, said in October.

Stevens and his wife, Maureen, were married 27 years, and there is "still a hole in her life as far as her husband is concerned," Schuler said then.

"It's a horrible, painful death, that they had to witness their loved one go through," Schuler said. "It's something that they'll never forget."

A February report by the National Academy of Sciences concluded that the FBI's evidence was "consistent with" the government's findings that the anthrax spores used in the attack came from Ivin's lab, but it could not reach a "definitive conclusion" based on the scientific evidence alone.

But the FBI and the Justice Department stand by their findings, saying that scientific testing gave agents "valuable investigative leads" that led them to Ivins.

The CNN Presents investigation "Death by Mail: The Anthrax Letters" revealed that since the 2001 anthrax letters the federal government has spent $19 billion to fight the threat of biological attacks. More than a thousand new labs have since opened to research so-called "special agents" and the government now counts nearly 15,000 workers handling germs such as Ebola, plague, and anthrax - about twice as many as before the anthrax letters.

Given the heightened concerns over the threat of a rogue insider, the FBI now checks potential workers for felonies and ties to terror groups. But proposed reforms like psychological screening or requiring two people in labs have gone nowhere, with scientists who have reviewed the issue calling those proposals intrusive, expensive and impractical.

Why is Congress so polarized, so gridlocked today? In part, it is because incumbents so rarely have to answer to the American voter.

In the past decade, 78% of the seats in the U.S. House of Representatives did not change party hands, even once. One expert says as few as 20 races can be considered toss-ups next year, out of a total of 435 seats in the House.

CNN's Drew Griffin investigates how “gerrymandering” locks in super-safe seats for many congressmen. This 200-year-old term is the name applied to drawing weird district designs so politicians can pick the voters they want, not what you may want.

CNN’s one-hour documentary “Gerry-Rigged: Why Your Vote Might Not Matter” airs on CNN Presents this Sunday, November 20th at 8 pm ET, replaying at 11 pm ET and 2 am ET.

Whether it’s college, high school or pee-wee games, football is a religion here and the players are its disciples. Disciples are laying it all on the line for that precious win ... that elusive trophy.

But football glory comes at a cost.

Concussions are on the rise in high school football and less than 40% of high schools have certified athletic trainers – the key medical personnel who can help diagnose and treat injured players.

In fall of 2008 Jaquan Waller, a Greenville Rose High School junior, died of "second impact syndrome," a fatal swelling of the brain that occurred when he took a blow to his head before his first injury had healed.

Waller returned to play because there no athletic trainer or certified medical personnel to help manage his injury.

The school district was faced with a challenge – to keep players safe from head injuries. So the community banded together with football giant East Carolina University to put athletic trainers on the field and to start high tech tests to monitor students brain health.

Their hope is to return this season to the championships ranks, without losing anyone. But can they get to the top without tragedy? 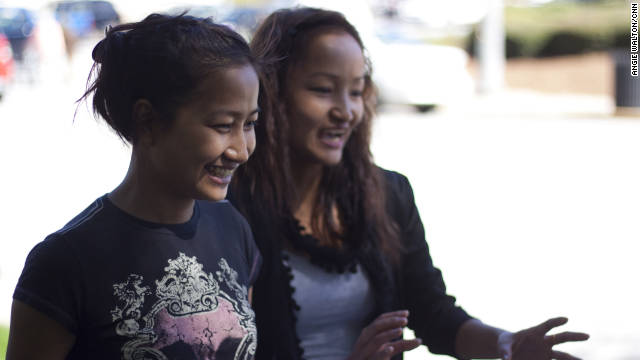 But here at a baseball field outside Atlanta, a group of giggling teenage girls from Ethiopia, Burundi, Afghanistan and Myanmar have found a level playing ground.

It's around noon, time for physical education class at the Global Village School, a small private institution for refugee teenage girls who have little or no English education.